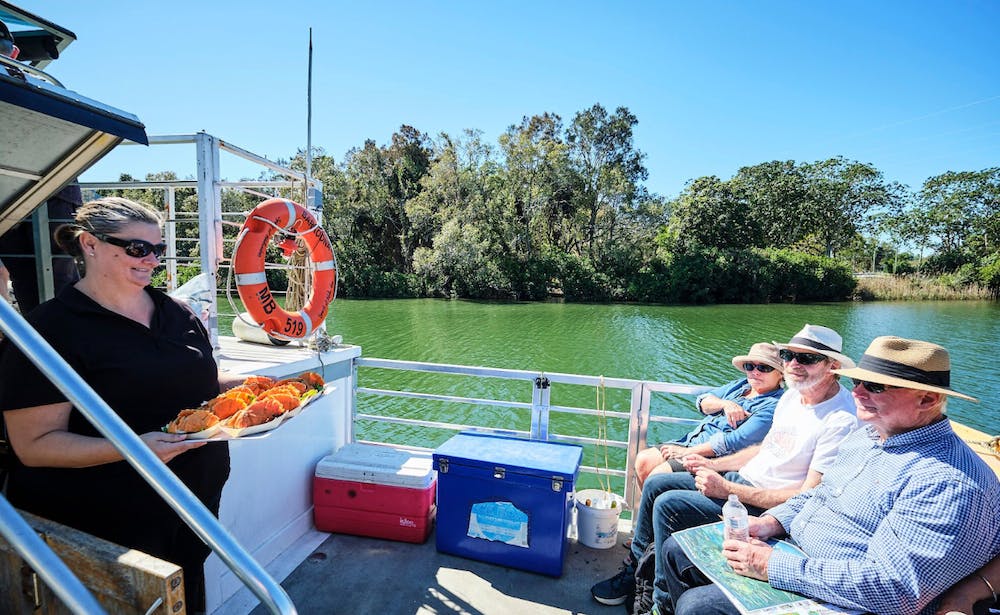 Have you ever wanted to just hop on a boat, idly cruise a stunning river catching glimpses of wildlife in their natural habitat, while sipping on a glass of chilled wine? Well join us on this adventure as we explore the Tweed Valley and its hidden secrets.

With smiling faces Mike and Dean from Mount Warning Tours greet us as we prepare to board the ‘Spirit of Wollumbin’ for our day out. As we wave goodbye to Tumbulgum Dean gives us an informative safety lesson about our life jackets, not that we aren’t in safe hands, but it is all in our interest, so we all listen attentively.

We head upstream to begin our journey siting Mt. Warning in the distance, traditionally called Woolumbin, its local aboriginal name. The Bundjalung tribe hold it in great tradition and respect. There was a volcanic eruption 23 million years ago, with it now the volcanic core remnant of a shield volcano.

As we meander along the Tweed River with expert commentary by Mike, we indulge in the coffee, tea and water freely available. Mike then proceeds to turn the craft around and sets off for the Rous River which is an offshoot of the Tweed River. The Rous River is a protected section of the Tweed Valley with the speed limit of just 4 knots. A canoe trail for kayaks has also recently been announced along ‘the Rous’ which opens it up for people to truly connect with the environment and wildlife around, exploring the intimate nooks and crannies the river has to offer.

With the beautiful trees lining the banks there is so much wildlife to encounter, we were lucky enough to spot Spoonbills, Cormorants and an Azure Kingfisher to name few. As we progress up the river, we spot a nest of Eastern Ospreys in a cradle on top of a power pole. The power company’s initiative in rebuilding nests for the native animals has been a great success with them providing spots for the birds to build their nests in.

Further down we find the regrowth has taken back what used to be a boat building factory, a cordial factory and a sugar mill. The land was owned by the Skinners but is now a wetland reserve.

The first settlement was a cedar cutters camp established in 1870, and as we pass by on the left side of the bank you can see the remains of the ferry service that operated from 1866 to 1986 – 130 years of river service.

The clouds are hiding the shimmering sun, so it is very pleasant on the top deck with the wind in our hair and a smile on our faces as we pass by Husk Distillery where they make the famous Ink Gin. They have been established for 7 years making Rum and Gin that has now become incredibly well known in Australia and several parts of the world.

Gin. They have been established for 7 years making Rum and Gin that has now become incredibly well known in Australia and several parts of the world.

By Australian ruling for rum to be considered as ‘rum’, it has to be stored in a wooden keg for at least 2 years. One of their well-known products is a white rum, officially named an Agricole rum derived from the juice of sugar cane. At the distillery they grow, harvest and process the sugar cane all the way through until they have a finished product of White Rum.

The Ink Gin has 13 botanicals blended for the gins unique flavour. The key ingredient to its blue-to-purple colour shift is called the ‘butterfly pea’ which gives the distinct blue colourful that reacts at different PH levels to change the colour, mainly with tonic water.

They also have a fresh produce café serving wholesome fresh meals; check them out open Wednesday through to Sunday and make sure you sample the different types of Gins. Although be sure to book ahead because they get busy!

We pass by Husk, making a mental note to visit for another day, heading for Stotts Island named after James Stott, a cedar cutter. Originally, Stott, an Irish convict transported for 7 years to NSW for stealing clothes – it was tough back in those days. The Island is a nature reserve made up of 141 hectares of pristine rainforest island with an array of trees such as Hoop pines, Bangalow Palms and there is also a fig tree reputed to be 750 years old. Also, there are different ferns such as spear and cabbage ferns, to name a few as well as wild finger limes. A rich diversity of flora and fauna occupy the island making it such an important ecosystem in the region.

The Tweed Valley has another feather in its cap, Neville Bonner the first Aboriginal politician was born here.

We are enthralled by the rich riparian flora the Island has to offer, sighting also osprey nests high in the trees, such a beautiful cross section we don’t get to see in our cities.

Now the fun begins with feeding the wild birds, with one of the crew throwing little pilchards over the edge, soon we have whistling kites, white belly sea eagles, ospreys, pelicans and seagulls all competing for the elusive prize. With great skill they descend from the sky and pluck the fish out of the water, safely anchored between their talons. The crew are very helpful as they help us take some great photos of the diving birds chasing their prey.

Now we head back to Tumbulgum to partake in lunch at The House of Gabriel which was originally a bakehouse many years ago, now a charming restaurant overlooking the river and an icon of Tumbulgum. Lee and Joanne are the friendly owners, with Lee preparing mouth watering dishes such as Vietnamese salad with tender chicken, glazed pork belly or cashew crusted prawns, decisions decisions! The gnocchi with tomato, fennel and parmesan is also a crowd pleaser. We sample a special seafood platter, with bugs, tender pieces of freshly caught fish, crispy chips, brilliantly cooked prawns, exquisite calamari and freshly baked breads. We sample an array of beers and wines. Lee and Joanne are passionate about using local produce including Stone and Wood, The Pickled Pig brewery and Husk Distillery for their alcoholic beverages. They grow their own produce in the edible garden and utilise composting their green waste ensure sustainability while keeping their own produce organic.

Lees background was Executive chef at the Treasury Casino for 7 years with 160 chefs to oversee, then The Star Casino Executive Sous chef with 280 chefs!! He always wanted his own restaurant to apply his unique slant on dishes. He uses an Italian/French influence in his own style. The desserts are to die for with orange almond cake and decadent chocolate brownies to name a few. They do a diverse breakfast with banana bread, to bacon and egg rolls, Huevos Rancheros Mexican style, to the house favourite Farmers Breakfast with eggs, streaky bacon, vine ripened tomatoes, hash brown, mushrooms, cheese kransky and to top it off sourdough toast.

They are open Wednesday through to Sunday for breakfast and lunch, drop by Lee and Joanne would love to meet you and make your visit a memorable one.

Well we have had a fantastic day, from cruising on the river, soaking up the sun and mother nature, to a beautiful leisurely lunch.

Make sure you give Mike or Dean from Mount Warning Tours a call and book your next excursion with them, they will organise everything for you so you can just relax and take in the sights.

Thanks again for making our day so memorable!